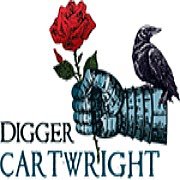 Miss Matisse: Yes, I love the worldwide web for the simple fact that now it’s not only Americans who can reap benefits, EVERYONE in the world now can! The “Indie” route whether writing, being a shop owner, music etc. I would say is definitely the way to go nowadays! What genres of stories have you written about?

Digger Cartwright: The Maynwarings: A Game of Chance is a western set in Carson City, Nevada after the Civil War. The House of Dark Shadows is a psychological thriller that is very character driven with what I like to think of as an Alfred Hitchcock-like twist at the end. The Versailles Conspiracy is a modern day political thriller with international intrigue, murders, conspiracies, and a lot of twists and turns that stretch from high society country clubs to strip clubs to political organizations throughout the world. Murder at the Ocean Forest is a period piece set in the 1940s at the famed Ocean Forest hotel in Myrtle Beach, South Carolina. It’s a traditional mystery along the lines of an Agatha Christie book where the “locked door” mystery keeps readers trying to solve the puzzle. But there’s also an international intrigue aspect to this once since it’s during World War II. Conversations on the Bench is an inspirational or motivational story that’s based on actual events. It’s a collection of life lessons shared between two friends, and as I’ve said time and time again there is something in that book for everyone who reads it.